Although anxiety has been a topic that is well-understood regarding what exactly happens to the body, little is known about the genetic variation causing anxiety; so a study was conducted focusing on the genetic cause for aggression in dogs, which can frequently be read through their body language since we communicate in different ways. But, although there are several breeds that have unfair, negative stigmas, there are a few breeds that have been proven to be more fearful or aggressive when compared to other breeds.

Scientists found 12 genes linked to traits in which the predisposition of aggression towards a familiar person or animal is distinct from that of new, unfamiliar people/pets. They discovered the genes in two genome regions which were consistent with the core fear/aggression neural pathway, otherwise known as the amygdala to hypothalamic-pituitary-adrenal-axis. 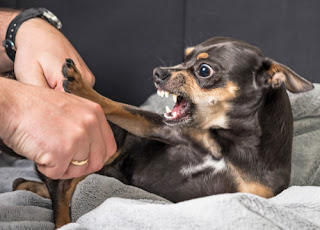 According to the scientists, the results are relevant to the most serious dog aggression problems, and should likely correlate to human anxiety disorders as well. They hope to eventually determine which neuronal circuits are affected by the risk variations, which could aid in locating drugs that could alter the behavioral effects. If successful, the goal would then be to determine the appropriate drugs for humans and develop a new drug therapy/treatment. Scientists say that if they identify the affected pathways, then biomarkers can be used to see who would positively respond to the treatment.

Anxiety is the most common type of mental disorder in the United States which validates how essential identifying the link between genetics and anxiety would be. Not only would we gain a deeper understanding for man's best friend, but it would benefit the human race immensely in terms of possibly alleviating the strains of a mental illness, or at least educating oneself on what to do if you're genetically prone to anxiety.