Researchers at Wayne State University School of Medicine have developed a non-invasive testing method - Trophoblast Retrieval and Isolation (TRIC). This method of genetic disorder testing is as legitimate as more invasive tests like amniocentesis, and can be performed as early as 5 weeks into pregnancy. Knowing that the placenta is derived from the embryo, its DNA is identical to that of the fetus, thus the cells collected by TRIC can be used for prenatal genetic testing. For this research, data was collected from fetuses anywhere between 5-19 weeks of gestation, all of which were proven to be effective test subjects. 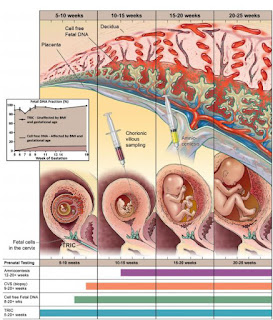 This research opportunity first started as a two year long grant given to the researchers in 2012. Shortly after publishing these discoveries earlier this month, a related paper, head researchers D. Randall Armant and Sascha Drewlo released a seperate paper describing a correlation between the presence of specific proteins in the fetus, obtained by TRIC, and pregnancy complications such as an undernourished fetus, and high blood pressure and kidney disorders in the mother.

Overall, this new fetal genetic testing method can prove to be immensely helpful in identifying the sources of pregnancy complications as well as learning how to manage troublesome pregnancies. I believe this is a much needed discovery in the development of the medical sciences, and that there is so much more that can be done with this new finding, in both testing method and complication correlations.