Big Cat DNA Is The Reason For Their Brink Of Extinction

Many "big cat" species of cheetahs, lions, tigers, and leopards have a conservation status of endangered all around the world. There are few of these big cat species or sub-species that are not at the very least vulnerable on the International Union for Conservation of Nature's Red List for Endangered Species. Scientists believe that their genetic make-up is to blame for these big cats on the bring of extinction. In a recent study done by a group of international researchers, the Amur leopard's entire genome sequence has been discovered giving insight on one of the most critically endangered of the big cats species. There are only forty Amur leopards left in the wild. This study of the Amur leopard's genome has led scientists to theorize that the reason behind the endangered conservation status of this species and so many other big scat species is due to their strict carnivore diet. Cats require the highest concentration of protein of any carnivore. They can not get their nutrients from plants, nor have their digestive systems ever adapted to process and digest plants. Their carnivore diet has led to much of their genetic code to change. Some of the changes are shortened digestive tracts, and digestive enzymes. Through evolution, big cats have become the most genetically optimized hunter. They have strong limbs, fast reflexes, night vision, flexible bodies, and the ability to run at high speeds. However, their genetic specialization has become a problem because it is too specialized to the point where it has become a disadvantage. According to the fossil record, specialization in carnivores has always led to shorter than normal extinction. Diet flexibility is important for an animal to have environmental adaptability. Herbivores and omnivores are able to change diets because their genes aren't as specialized as carnivores. Wildlife is diminishing on this Earth due to habitat destruction and pollution. When wildlife is at a rapid decline, big cats such as the Amur leopard do not have as many options for their prey anymore. Carnivores are at the top of the food chain which leads to smaller populations as well. Their specialized genes give them low genetic diversity and their small population sizes give them even more of a smaller gene pool. 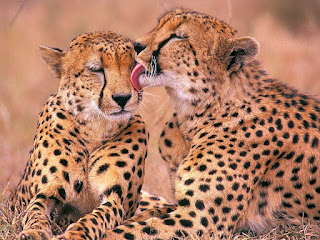 My favorite animals on Earth are all of the big ca variety. The realization that their carnivore diets have effected their genome sequence can possibly lead to realistic conservation solutions. Their specialized genes due to their diet and small population sizes have targeted them to only be able to live life a certain way that is not as possible because of humans effect on the earth. Humans are responsible for causing changes in the environment that hurt animals. However, with knowledge from this study and scientists working on using the information from the genome sequence there is a possibility that diet adaptability may be a conservational effort attempt in big cats. The genetic alterations of diet effects most of their genetic material. The most powerful animals on Earth are carnivores, but because of their inability to adapt, they are the most vulnerable in an ever-changing environment. I suppose the survival of the fittest is truly based on adaptability after all.