Rhinopithecus bieti, or colloquially known as the Yunnan snub-nosed monkey to people from Tibet, are a very interesting group of monkeys. Living over 4,000 miles above sea level, it is a wonder as to how they are able to acclimate themselves to not only the weather but also the altitude. So how do these monkeys remain at such high altitudes? 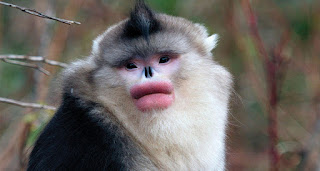 The answer to that question may lie in the snub nosed monkey’s genes. In a genetic study of the monkeys’ DNA, it was determined that there were 19 major gene variations that contribute to the monkey’s ability to thrive at such high altitudes. As the only non human primates to live at such high elevation there must have been many things that contributed to their selection for these genes.
Through reconstruction of the evolutionary history of these snub nosed monkeys, researchers determined that episodes of climate variation may have shaped these monkeys to what they are today. One of the major genes involved in the monkey’s ability to inhabit such high elevations is the ADAM9 gene (See genome sequenced here). Interestingly enough, there are versions of this same gene located in yaks and chickens found in Tibet. In relation to the selection of genes, the ADAM9 gene was most likely selected for its ability to allow these animals to live in such low oxygenated conditions. Similar to these monkeys, the people of Tibet also have adaptations to the high elevation of Tibet inherited from their extinct relatives known as the Denisovans. The genetic variant that has been examined to be the cause of this adaptation is known as EPAS. Thanks to genes and many years of selection, the snub nosed monkey and many others, including humans, have been able to acclimate themselves to high altitudes where the oxygen levels are scarce.
As someone who enjoys hiking up large mountains, I think the gene like the ADAM 9 would be something that could help me personally to climb higher mountains without having to waste time acclimating to the altitude. Perhaps in the future, the ADAM 9 gene could be isolated and potentially sequenced to find a similar allele in normal human beings like me. In that way, potentially, regular people could climb higher and higher like these snub nosed monkeys or even Denisovans.
(https://www.sciencenews.org/blog/science-ticker/genes-help-snub-nosed-monkeys-live-high-life?mode=topic&context=87)
Posted by Vinh Dang at 5:42 PM