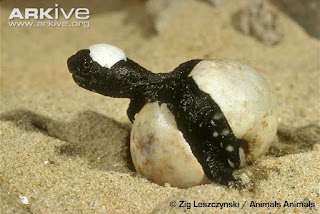 Scientists have recently been studying snapping turtles and the effects that climate change has on the species.   It’s no secret that global temperatures have been increasing more and more as time progresses.  Snapping turtles, as well as alligators and some lizards, lay eggs that are temperature-dependent.  Their eggs are so sensitive to temperature that even a small change in temperature can alter the determination of what sex they will be.

Researchers studied how the change in temperature will alter specific genes responsible for sex determination.  They found that the CIRBP (cold-inducible RNA-bindingprotein) gene is directly influenced by changes in temperature.  This gene isn’t the only one responsible for the fate of the turtle’s sex.  There are other factors that work together to determine what the egg becomes.  Female eggs are produced at higher temperatures than males.  There is a five-day window in the egg’s development process in which temperature could have a very big effect on the resulting turtle.

Human beings need to make a huge change in the way we live our lives.  People are extremely careless and don’t think about how their wasteful lifestyles can hurt populations of species.  If global temperatures continue to rise, there will be an abundance of female turtles, making it very difficult for the species to survive and reproduce.  This is happening to other species as well, driving some to extinction.
Posted by Unknown at 8:02 AM