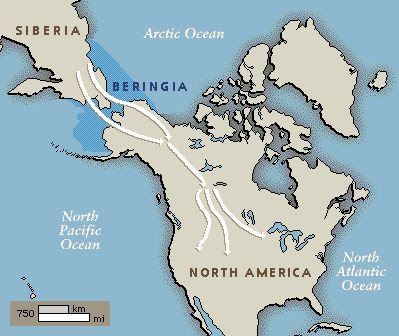 Living in the United States of America the "melting pot" of the world we consider ourselves Americans even though everyone has a different ethnic background and linage. There were native Americans and pilgrims living when the land was first colonized but who was before them ?
The exact timing, route, and process of the initial peopling of the Americas remains uncertain despite much research . Archaeologist with the help of geneticist used mitochondrial DNA found from ancient remains indicating the presence of humans as far as southern Chile 14.6 thousand years ago. This time period puts this migration of people shortly after the retreat of the Pleistocene ice sheets blocking access from Eastern Beringia. The initial idea of where humans first entered America.

The data suggest a small population entered the Americas via a coastal route around 16 thousand years ago, following a previous isolation in eastern Beringia 2 - 9 thousand years earlier than previously thought. Following a rapid movement throughout the americas, limited gene flow in South America resulted in a marked phylogeographic structure of populations that remained constant.

All go the ancient mitochondria linkages detected in this study were absent from modern at a sets suggesting a high extinction rate.

In conclusion the first travelers to the Americas were unsuccessful, Maybe if it wasn't for a poor gene pool the Americas could been a lot different.