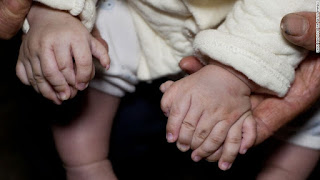 Hong Hong, a 4 month old boy who lives in China, was born with 31 fingers and toes. He has 15 fingers and 16 toes, but no thumbs. His condition is called polydactylism, which happens in humans and some animals, giving them extra fingers or toes. This condition affects 1 out of every 1,000 live births but the extra fingers/toes are usually removed surgically.

This condition is genetic and passed down from generation to generation. Hong Hong's mom has the condition with 6 fingers and she was worried her child would get it too. Since the surgery to remove the extra digits usually happens at the age of 1, Hong's family is trying to raise money for the $30,000 surgery in the meantime. Not only will he need to remove the extra fingers and toes but he'll also need to get reconstructed thumbs in order to properly grasp things.

This article was very interesting because my cousin had an extra finger that she had surgically removed. None of her two children have the trait and neither do her parents. After doing some research, it was said that this trait can be either dominant or recessive, which explains my cousin's situation. I really hope Hong's family raises enough money for the surgery.
Posted by Kajal Patel at 7:31 PM