Women's Emotions Do Not Cause Their Migraines

A very common misconception is that women's migraines are directly related to their stress and emotions and their inability to manage them. It was also thought that the likelihood of a women getting a migraine would increase when it was her "time of the month" only because that is when women tend to be more emotional. In reality, neurologists have discovered that this abnormal brain activity actually has nothing to do with emotions.

36 million people suffer from migraines in the United States and women are three to four times more likely to experience them. Women's migraines do correlate with their menstrual cycle, though not because of a change in emotions. Hormone fluctuation, along with environmental factors attribute to migraines. Those are not the only factors though. It has been found that variations of more than 40 genes are associated with migraines and there is a genetic component to at least 50% of migraine cases. This genetic predisposition to migraines, along with certain "triggers" (such as light sensitivity) activate networks in the brain that are interconnected and allow for a migraine to occur.

Suffering from migraines myself, this has been an interesting read and has broadened my understanding of why I experience migraines. I have always focused on finding specific triggers to my migraines. I have now learned that even though certain things may seem to increase my likelihood of a migraine, they are not the only piece of the puzzle, and that I am most likely genetically predisposed to experiencing migraines. 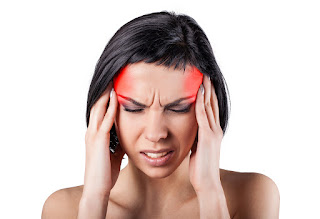 http://akhelp.com/907chiro/wp-content/uploads/2014/05/migraine-and-blurred-vision.jpghttp://www.nytimes.com/2016/04/07/health/debunking-migraine-misconceptions.html
Posted by Unknown at 10:12 PM