A new genetic study was performed to trace ancient populations' migration across the New World. For years, scientists have pondered about the route and the duration of the earliest American's travels through North America and reaching European contact. These studies imply that this contact may have been more ruinous for indigenous populations than researches expected. 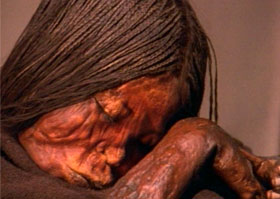 Archeologists have recently discovered 92 skeletons and mummies of individuals living between 8600-500 years ago from western South America, ranging from Mexico to Chile. A team of researches collected sequences of each individual's mitochondrial genome. Mitochondrial genes are passed down to the offspring of their mothers, displaying the matrilineal heritage of indigenous Americans detecting all the way back to their roots in Siberia.

Geneticists applied a technique of recording the random mutations accumulated amongst the populations that have been separated, enabling them to count backwards and determine when two groups last had their common ancestor.

Researchers found that it was about 23,000 years ago when their ancestors were last in contact with Siberian populations. A theory that the ancestors of the earliest Americans spent a few millenia stranded in Beringia before the glacial land was melted and open up passages to the New World was supported when they then discovered that a group with about 2000 child-bearing females spent roughly 6000 years genetically disconnected from other groups of humans. Following research entailed that 16,000 years ago the population boomed with various lineages abruptly branching from one another, representing the event at which people were first able to migrate out of Beringia and into the Americas, hosting new land and recourses for the population to grow and rapidly develop.

After finding 84 separate genetic lineages represented by the 92 samples, they discovered that none of the 84 lineages found are even traceable past European contact, explaining the severity of the population collapse, some of those populations wiping out completely one the Europeans have arrived.

Although this genetic study supports the theory of the disastrous effect of European contact and its aftermath, we have to consider that only the matrillineal heritage of the indigenous Americans were examined with the mitochondrial DNA. We still have to keep in mind the other sides of the story- what happened to all the males, or what happened to the rest of the women who did not bare children.