Why Are Some Patients Resistant to Genetic Diseases? 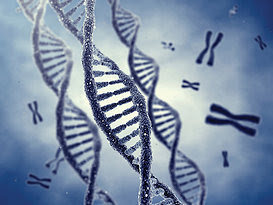 Some diseases, such as Huntington’s, sickle cell, and cystic fibrosis, are controlled by a single gene. These are called Mendelian diseases. This means that if a patient has a certain mutation on that one specific gene, that person will have the disease. However, in a recent study, researchers found a handful of people, who although they had the mutation, did not display any signs of the disease. This lead to the belief that understanding what makes these people different could help lead researchers to better treat, or even prevent, these Mendelian diseases.

In a new study, researchers analyzed 874 genes collected from over 400,000 people (all supplied by 23AndMe). Of the 874 genes, researchers focused on the 584 Mendelian conditions that set in during a patient's childhood, and compared that data to information about the patient's health.  Out of the 400,000 people analyzed, researchers discovered 13 individuals whom although had the mutation that would indicate a Mendelian disorder, they did not show any signs of the disease. However, researchers are still looking for what these 13 people have in common.

In my opinion, the most interesting/exciting thing about this article is how researchers were able to utilize the genetic information complied by 23AndMe. This is just one of many articles I have read that mentioned they utilized 23AndMe. However, one big limitation to using 23AndMe, at least in this type of study, is that researchers cannot contact any of these individuals family members, so that prevents them from being able to compile an entire genome.