It goes without saying that genetic diversity is necessary for a species to survive in the long run. Genetic diversity in a large population greatly increases the chance of survival for many different events, like disease or a new predator introduced in the area. Also, with a high amount of genetic diversity, unfavorable genotypic and phenotypic traits can be 'weeded out' from generation to generation, increasing a species' survival.

Recently, the entire genome of Acinonyx jubatus (African cheetah) was sequenced by Dobrynin et al. in 2015, which reveals some surprising (and unfortunate) results. Of the approximate 30 mammals that have had their genome sequenced to date, the cheetah has the lowest amount of genetic diversity - lower than other wild cats, and even inbred domesticated dogs and cats. From an evolutionary standpoint this makes sense - cheetahs have been around for approximately 3 million years, and fossil records show at least two different periods (bottlenecks) where cheetahs were forced to interbreed in order to survive. The first period occurred about 100,000 years ago, and the second during the Pleistocene epoch. Due to these small populations breeding with each other, many of the same genotypic and phenotypic frequencies would carry onto subsequent generations, severely lowering genetic diversity in the long run. 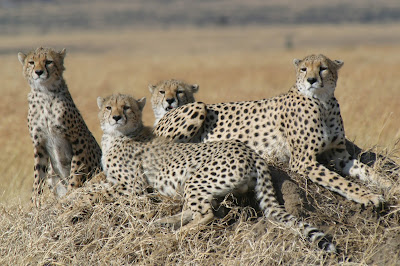 This might not be such a big deal, except there are only around 10,000 cheetahs left in the world (and in captivity). In an experimental attempt to determine the amount of diversity within the species, scientists did skin grafts on several cheetahs, and none were rejected. The way Dobrynin and his other colleagues analyzed their genetic diversity was through use of SNVs, or single nucleotide variations. Compared to the genomes of domesticated cats, cheetahs are (on average) 95% homozygous, while domesticated cats are about 24%.

I hope this doesn't foreshadow the extinction of this species in the near future. Unfortunately, because African cheetahs are so genetically similar to one another, a newly introduced disease could easily wipe out the entire species if preventative action is not taken. In order to avoid extinction of this species, selective breeding/outbreeding should definitely be considered. This type of action has been used with the Florida panther (which is also very endangered), and so far it's been working. If the number of cheetahs continues to decline, biological effects like genetic drift or bottlenecks can have a drastic effect on the population (disease as well). With the right steps taken, the cheetah will not become just another extinct species.