The Ability to Regenerate Organs and Limbs Hidden in DNA Sequences?

It is known today that descendants of regenerative organisms such as today's salamanders and zebrafish still possess the very impressive ability but humans unfortunately lost their regenerative ability long ago. With this thought in mind, a study lead by Dr. Kenneth D. Poss at Duke University has discovered a DNA sequence found in zebrafish called "tissue regeneration enhancer elements" or TREEs. These sequences can turn on genes at an injury site and when turned on can even change organisms with the inability to regenerate organs and limbs to become able to regenerate.

Dr. Poss states that the main goal behind the study is to understand more about how regeneration works and to inform the human race of their full potential. He says that in their studies they have learned that there is potential of activating the genes responsible for regeneration that we all have in our bodies. In result of much research done on zebrafish, research has found molecules such as neuregulin 1 which regenerates heart muscle and fibroblast growth factors which make regeneration of zebrafish fins possible.
What was learned by Dr. Poss and his team is that TREEs are present during the embryonic stages of development. Dr. Junsu Kang who is the lead researcher on Dr. Poss's team found that a gene called leptin b was turned on in fish when they are injured and after sorting through 150,000 base pairs in the sequence, he found an enhancer element. He split the enhancer element into two separate parts and fused one with the fibroblast growth factor and one with the neurogulin 1. In result transgenic zebrafish whose fins and hearts had extremely superior regeneration after injury to both their fins and heart. Furthermore, a collaborator Dr. Brian L. Black at the University of California attached one TREE to a gene called lacZ and found that by borrowing the elements from the genome of the zebrafish, it activated gene expression in injured paws and hearts of mice.
From this large advancement in technology, Dr. Poss and his team plan to further study these types of elements so that they can understand what controls regeneration. The ultimate goal of regeneration research is to one day enhance surgical processes and ultimately biologically and natural 3D print (create) organs and limbs. 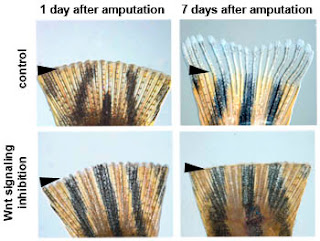 I find it so intriguing how far we have come in even the past 5 years with medical technology and advances in understanding the complexity of the human body. Before I was ignorant to relation between organism such as zebrafish for example and us as humans. I did not realize that by learning more about other organism and the specifics to how they function can be directly linked to understanding more about the human body. I think that since they have recently been able to regenerate the paws and hearts of mice, that next they will try to regenerate the limbs of a large mammal and then eventually perform a trial with a human amputee. I look forward to seeing what happens as the work of Dr. Poss and others continues.

Posted by Hailee Anzisi at 8:36 PM