Genes are extremely complex and we will probably spend the rest of earth's time trying to understand everything there is to know about them. Our sidekicks on this quest have been and probably will always be lab mice. This time they're helping scientist have a better molecular and neurological understanding of stuttering. There is a gene mutation that has been associated with stuttering called Gnptab. Researchers working on this study at the National Institute on Deafness and Other Communication Disorders placed this mutation into mice to study their vocal patterns. 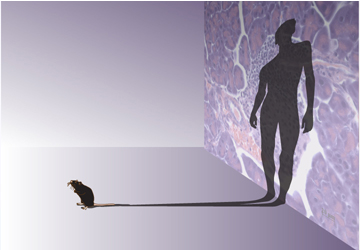 Even though mice cannot speak, they can produce sounds and mimic the patterns we have in speech. In fact, the mice with the mutation were found to have the same "stuttering" patterns humans who have a stuttering issue have in their speech. These present themselves as non-random sequential pauses interrupting the flow of speech. The researchers created an algorithm to help them prove the existence of a stutter in the affected mice. The mice were found to be completely normal in all other aspects though, which is normal for humans as well. This shows the craziness of gene mutations! They are actual mutations on a gene that can change a function completely, but not affect anything else except that ONE thing.
Now that scientist were able to replicate this disorder in mice, they can further their research in it. This is a big step in helping find better and earlier treatments for the disorder in humans. It also is a good breakthrough in developing other disorders we see in humans, in mice. Once again mice help us develop new scientific discoveries and who knows what will be next!