Could having worms be beneficial for Crohn's patients?

A recent study suggest that parasitic worms could lead to new drug development for people with Crohn's disease and other bowel related diseases.  Mice with a mutation in the Nod2 gene were used in the experiment because its similar to the gene in humans that is associated with Crohn's.  The introduction of parasites caused the mice to have more mucus in their intestines than uninfected mice, as well as more bacteria from the Clostridiules family and less B. vulgatus bacteria.  This shift in the bacteria populations and increase of mucus in the intestines was shown to calm inflammation in the bowels. 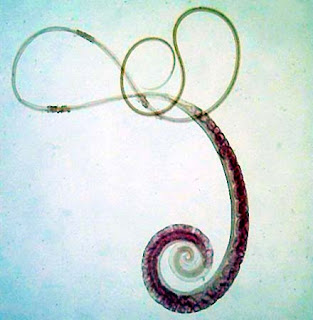 Although it seems like it could be a good idea, the article states that some individuals that took a deworming drug experienced negative consequences.  For these individuals, they had less Clostridiales and more Bacteriodales bacteria populations in their gut due to a significant drop in Trischuris trichiura whipworm eggs.  Evidently, more research needs to be done.