Epilepsy is the fourth most common neurological disorder, which has an affect on people of all ages. This neurological disorder is characterized by unpredictable seizures and can cause other health problems such as schizophrenia and other severe mental illnesses. Epilepsy is a spectrum condition, which has a wide variety of seizure types varying from person to person. The seizures in epilepsy could relate to a brain injury or a family history of the disorder, but this cause has no cure and the treatment may work for some others can't be treated even with the most high dose medication.

From the many types of epilepsy, not all of them are inherited, but in the case of generalized epilepsy it is inherited because it includes many genetic factors than partial factors. Overall, the risk of having or getting epilepsy is greater for a child whose father has the disorder, but not if the mother has it. And if both mother and father have the disorder the risk becomes much higher. For people who have epilepsy, they are allowed to have children without taking much consideration because most of the time these factors don't play a role in their children except in the worse case scenario where the child has brain damage such as a concussion. 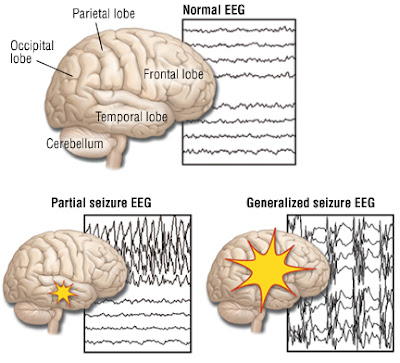 What drug is able to control epilepsy successfully?

A study has been done on two different drugs, one is Aptiom which is a one-a-day drug and the other is Tegretol and Carbatrol, which are twice-a-day drug. From the two type of drugs both have been successful. This is because the study was conducted on more than 800 patients who were diagnosed with partial epilepsy and as a result 71% taking the first drug and 76% taking the second drug were seizure-free. This test was conducted over the course of one year resulting 65% taking the first drug and 70% taking the second drug were still seizure-free. Overall, scientists and pharmaceutical companies recommend that the once-a-day drug is more helpful to the patients with memory problems and it has a more stronger impact on the disorder than the other drug.

*I believe that the drugs will help shape the future of these patients who have epilepsy. The drugs already developed are basically acting like DDT on pesticides. Based on this article I hope these medications don't ware of in the future. We have too many people getting this disorder but too few who can do anything about it. I have even saw many other drug alternatives that can be of treatment of epilepsy such as cannabis but I believe it can cause tolerance to the substance itself because of the high amounts of THC.
Posted by Brij Shah at 11:34 PM