Does this study provide any evidence that this is a reoccurring scenario?

In a recent study, scientist have found that the risk for developing a disease, disorder, or mental illness is greater  for children who have been derived from a middle-aged father. Overall they have many possible links of disorders such as bipolar, schizophrenia, and autism with children of older fathers. In this study, a test was conducted in Sweden where scientists noticed that men have a "biological clock" for there sperm.

Therefore, this means that over a period of time just as women experience menopause, where the egg isn't able to get fertile as it used to. The same theory lies with men where at a certain age their sperm isn't able to function properly because of random mutations that go on in the genetic sequence. When talking about mutations in genetic sequence we are discussing the error that occurs in those particular set of chromosomes that were being used to fertilize the egg. 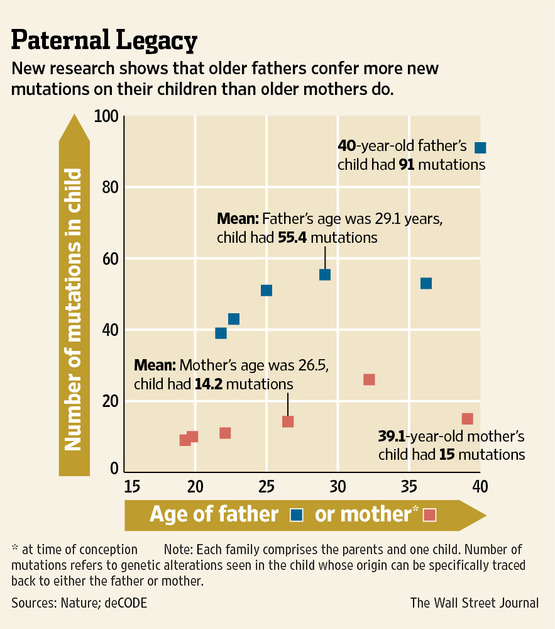 What are the chances of a child developing a disorder of a older father?

According to a research team led by Brian M. D'Onofrio from Indiana University, they decided to look up and find evidence that this study was correct by searching medical records of 2.6 million people born in Sweden between 1970's to 2000's. From this finding, it came to no surprise that children of young fathers had a less chance of developing a risk of a mental illness than the same father who was in his 40's whose child was two times likely to develop an illness, more than three times of developing autism, and ten times running a chance of developing a disorder such as schizophrenia.

What is happening as far as genetics goes?

Again just as women have limited number of eggs. Men begin to accumulate a number of random mutations within their sperm cells. This study indicates that cells' repeated reproduction causing random errors to occur in the sequence which are called de novo mutations. These mutations are found to be harmless to the male who have accumulated over time but sometimes an over accumulation has linked them to mental disorders.


*To conclude, children of healthy and young parents have 1 out of 300 chance of developing an illness. And a threefold increase, places them at about 1 out of 100 which is still relatively low. Moreover, more research and studies will help bring precautions to this tragic occurrence. Based on this article, I feel that this is absolutely true and even looking at the basis of common sense as you get older or any part of you gets older such as your mind it starts to become useless and it stops or doesn't function as properly as it used to.