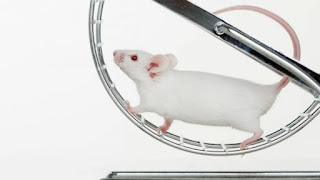 If you exercise during pregnancy, is your offspring going to love exercise? Scientists have found that mice born to mothers that ran, enjoyed running as adults. As for the mice born to nonathletic moms, did not share the same fondness for exercise. This is also noticeable in actual people. Parents who are active, typically have children who grow up to be active. Scientists believe that this is not only due to environment, but also genetics. They have found bits of DNA that can lead a person who carries it to be athletic. Adding on to this theory, a baby's body and DNA can be changed by the environment in the womb, which can affect health and disease risk.

An experiment helped proved this case with genetically identical mice and a cage with running wheels. Since mice typically love running, all the female mice in this experiment ran on wheels for about a week and then were mated with the male mice. About halfway through the pregnancy, half of the pregnant mice's wheels were locked so they couldn't run anymore. The other half of the pregnant mice were allowed to run freely, which they did. Once the pups were born, they were separated from their moms so they couldn't see and copy their moms running. All of their cages had unlocked wheels and monitors that tracked their movement. Entering adolescence, they found the mice born to running mothers were more athletic themselves than the other mice. During their middle age, the mice born to runners were still more athletic than the ones who weren't. Although this can't tell us much about humans, the experiment concluded that a mother's physical activity during pregnancy does impact the physical activity of the offspring. Dr. Waterland believes that the mother's physical movements alter the fetal brain development and that certain biochemicals pass through the placenta affecting the baby's gene activity. He also strongly urges that mothers do not take this as criticism!

This was a very interesting article. The results of the experiment were cool because the newborn mice were put in the same exact cages away from influence from their mothers, yet the mice born to runners were still more athletic than the ones who weren't. I do believe that it is very important to try and exercise when pregnant, not to have an active child but just for the baby's health. Not anything hardcore but walking and stuff.
Posted by Kajal Patel at 6:42 PM