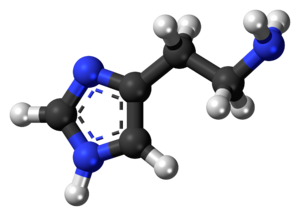 Histamine is a well kown neurotransmitter and commonlly associated with "the immune response to the presence of invading bodies" such as pollen.  Often times, this response is overexhibited by the body in instances like the previously considered pollen example.  Thus, antihistamines are typically employed to mitigate this overreaction induced by the immune system.
In frequent exercisers, this inhibition of the natural output of the histamine compound may not be worth clearing a stuffy nose however.  Researchers working at the University of Oregon have recently discovered that antihistamines have an effect on the expression of genes involved in  muscle and blood vessel recovery. "After vigorous exercise, some 3,000 genes go to work to aid recovery by boosting muscles and blood vessels, but in the presence of high doses of antihistamines almost 27 percent of the gene response is blunted, according to University of Oregon researchers."  This 27%, or about 800 genes, that becomes blunted by antihistamine intake could play a significant role in post-workout recovery.  Oregonian researchers made  no conclusive claims about whether or not antihistamines should be avoided during exercise.  However their study showed clear evidence that 88% of the genes that were affected by antihistamines responded with decreased expression.  This could have very serious societal effects if the implications of this study are taken seriously.  The pharmaceutical industry could potentially take a big hit and athletics could greatly improve the yield of their workout if this becomes a trend.
Posted by Unknown at 9:00 PM