Vision  is one of the most complex processes in the human body. Because of the density and connectivity of  neural pathways involved, it's extremely hard to target areas and try to restore sight. For this reason all opto-genetic testings up until this point has been done upon animals.  However, in the next month, RetroSense Theraputics will inject a Virus injected into legally blind volunteer's eyes, to restore sight. 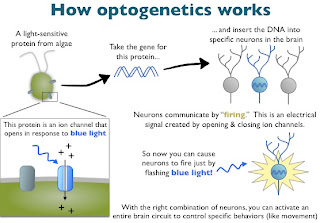 How it works is, the DNA coding for the light sensitive protein in algae, chanelrhodopsin-2, activated retinal cells under blue light. This activation allows for visual information to be transduced to the brain. Here is how to prepare the virus.

The mechanisms of chanelrhodopsin-2 are astounding, In the absence of blue light, it is like a tunnel compressed. When it is activated by the blue light it opens, flowing molecules through. When mice received this virus and attached to a fiber optic cable, brain movements could be controlled by light here is what happened.


In the video, the blue light activates the neuron on the right hemisphere shown when it runs in left circles.  The yellow light turns the neuron off.


This is extremely interesting because it is the first study of this kind that will be performed on humans. There have been optogenetic tests performed on mice, but Scientists do not know if this will work with the Human Eye. Will the eye reproduce the genes from Chanelrhodopsin-2 as its own? I am extremely excited to follow up.
Posted by Francesca LiCausi at 10:46 AM