Just last year, scientists from Shaanxi Normal University in China developed a colorimetric analysis test for detecting faulty or unwanted genes (such as the BRCA1 and BRCA2 genes, implying a high risk of getting breast cancer). Colorimetric tests are usually used to determine the concentration of a specific chemical or reagant in a solution or compound, through use of a color reagant for easy detection. When this technique (specifically, an ultrasensitive cascade signal amplification strategy) is applied, it becomes visually easier to detect genes that cause colon cancer, breast cancer, and countless other diseases. 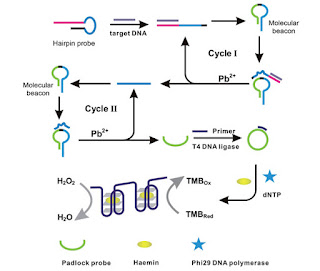 According to their published paper in RSC Advances, the six researchers began their experiment by using a hairpin probe containing a 3' DNA sequence for target recognition and an enzyme referred to as DNAzyme. Upon contact with target DNA sequences, the enzyme freed itself, cleaved multiple molecular beacons, and as more DNAzymes were released, padlock probes triggered an RCA reaction (which amplified the DNA). This amplification produces a different DNAzyme that reads out signals, such as BRCA1 detection, so precisely that it can detect the gene down to approximately 3.3fM (femtolomars) (RSC Publishing).

Of course, there are alternative ways of testing for genes such as BRCA1/2, so this new technique isn't an 'end all be all' for gene detection. However, I think this is certainly a more accessible method of doing so. For one, using RCA to amplify the sequences in question is a great idea, because the detection of the gene will be far easier to see at the end, especially in colorimetric analysis. It's like putting layers of the same color on top of each other - easier to detect, harder to miss. More than that, due to Myriad Genetic's recent loss of patent protection for their BRCA1/2 gene test, more accessible tests are needed. If this test continues to be experimented with and researched on, it's likely doctors will soon be using them in hospitals worldwide. I'm personally excited to see where this leads.