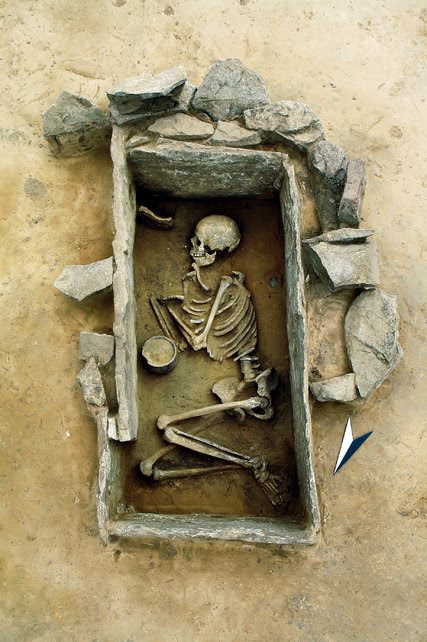 Agriculture Link to DNA Changes
Within a recent study, scientist have discovered that people's DNA changed drastically, following the incorporation of agriculture. Specifically alterations in height, digestion, immune systems and skin color were noted. Through the study of ancient skeletons, two evolutions have been discovered. First, prior to the rise in agriculture, the European population was made up of hunter-gathers. This population was then influenced by a population in the Near East and then finally by a nomadic population from Russia. As a direct result, the diets of these populations changed. The initial diets of the hunter-gather were ill equipped, for example, to digest milk. Not until the population began raising cattle did the gene LCT appear, which assists in milk digestion.
Additionally, the study noted that the original hunter-gather, who originated from Africa, had darker skin while the farmers from Anatolia were lighter, a trait that spread through Europe. The basis of this belief being that the early hunter-gather managed elevated vitamin D levels via the meat that was caught. While the farmers captured more vitamin D due to their exposure to sunlight at high altitudes. However, the spread of lighter skin, it is theorized, is the result of greater agricultural emphasis which resulted in lower vitamin D levels.
In the end, the study of ancient skeletons has provided an increased size or research subjects which, when studied have revealed an evolution. This genetic evolution is directly linked to the transition of gathering foods to hunting foods; from hunted foods to agricultural foods.
Our DNA will continue to change, and future researches will be able to take notice. Our food will continue to change and our bodies will adapt to it.