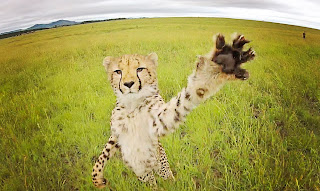 The cheetah is on its way to extinction today due to its unfortunate gene pool. Researchers from the St. Petersburg State University in Russia have collaborated with BGI in China and CCF in Namibia to sequence the genome of a male Namibian cheetah and six other wild cheetahs from Tanzania and Namibia. The found further insight as to why the cheetahs have such an impoverish gene pool which elevates juvenile mortality, causes extreme abnormalities in sperm development, and increases vulnerability to infectious disease outbreaks.
Interesting enough, there was damage in one specific gene, AKAP4, which hinders sperm development and may explain why cheetahs have a large proportion of defective sperm, and thus low reproductive reproductive success.
It is believed that the cheetah is a a descendant of the relative of the American puma and their fossil records extends to the Americas, Europe, and Asia. The population suffered two known bottleneck effect, which is an event that reduces a population through environmental factors.
One of the bottlenecks took place 100,000 years ago in the late Pleistocene era, which was a period shaped by repeated glaciations. This was when cheetahs started to move toward Asia across the Beringian land bridge and then they travelled south to Africa. This increased incestuous mating. The second bottleneck occurred around 10- to 12,000 years ago, which caused further loss of endemic variability observed in modern cheetahs. This was when cheetahs disappeared from North America due to the loss of the last glacial retreat.


I find this article to be interesting because conservation biology particularly interests me. The fact that scientists are able to discover so much of the history of one animal speaks volumes. It gives insight in what conservation biologists can do to prevent the extinction of the cheetah species.
Original Article
Related Article
Posted by Melanie Cucunato at 11:26 PM