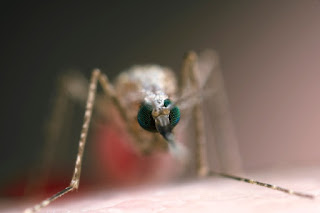 Malaria is the number four leading cause of death in Africa.  Accounting for 6% of deaths in sub-saharan Africa. Scientists however may have recently cracked the case to wipe out the disease in some regions for good.  Malaria is spread almost entirely through mosquitoes.  In Africa the mosquitoes that spread Malaria are infected with a parasite of the Plasmodium genus.  Every time a mosquito bites a human it injects some of the parasite into their blood stream.  Scientist have been studying the mosquito's genome intensely to discover a way to fight Malaria.
The idea was that if scientists could engineer the mosquito's genome so that it would be resistant to the parasite than the mosquito would no longer spread the disease.  However the problem was that it is nearly impossible to genetically engineer a whole wild population of mosquitos with the same gene.
Insert the concept of "gene drive".  Gene drive basically is a way to alter the inheritance pattern to favor the inheritance of one particular gene.  This would allow the genetically engineered mosquitos to pass on its resistant genes to all of its offspring rather than just half.  Anthony James a molecular biologist at the University of California Irvine wrote a paper suggesting that this method of gene drive could affectively wipe out malaria.  He recently was contacted by other biologists who successfully engineered a gene drive in fruit flies.  James used their same method a gene editing system called CRSPR-Cas9 in mosquitos and found that 99% of the offspring received the resistant gene.
In my opinion I am a bit skeptical by engineering entire populations of mosquitos, because we do not know any other side affects of the gene drive or transgenic material in the mosquito.  However I am amazed that there is a method that scientist have come of with that has the capability to completely wipe out a disease in Malaria that has plagued third world countries for centuries.