Fending off Infection in Future Generations 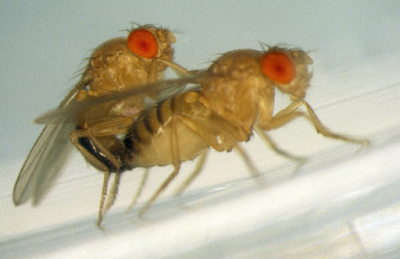 "Female Drosophila that are infected with bacteria are somehow able to boost the genetic diversity of their offspring, according to a study published last week (August 13) in Science"

Nadia Singh and her partners conducted an experiment to the theory. She collected female Drosophila Melanogaster and infected them with different bacteria before they mated. What she found out was that most of the offspring that undergone recombination events were the infected animals than the normal animals.

Singh tells the Nature Magazine, the eggs that do go through greater recombination when the female fruit fly is infected, produce viable embryos. It is still unclear how fruit flies are able to increase the frequency of genetic recombination in their eggs. Geneticists seem to be unsure and know that there will need to be more experiments done in the future.

"It is interesting what the female fruit fly can pass on to their offspring. How can a disease, actually do something beneficial to an offspring? In Thomas Morgan's experiment, he found out that the white-eyed recessive trait was a gene on the X chromosome. To me, it is something about the female fruit fly that has the ability to influence the offspring genetic makeup. Why is it not when the male Drosophila are infected, the eggs go through greater recombination?"