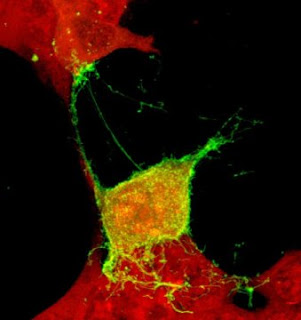 The Ebola virus is a deadly infection that replicates so fast, the immune system has a hard time working fast enough to suppress it. This makes the virus have such a high mortality rate. Researchers at the University of Pennsylvania discovered a method to stop the virus from being able to exit the host cell, trapping it inside. The virus commandeers the host cell, reproduces, and then destroys the cell releasing many other replications of the virus into the body to begin the same process over again. The researchers used virus-like particles to mimic the protein coat of the virus without needing to use dangerous live viruses and found when these particles were budding out of the host cells, there was a spike in calcium levels. When host cells were modified with a mutated gene called ORAI1, which encodes a calcium channel, it was shown  that the Ebola reproduction rate dropped drastically. They also found that if they suppress a gene called STIM1, the same reduction in the virus occurred. They then tried this test with live Ebola viruses and a few other viruses that showed similar reductions in production from the ORAI1 and STIM1 mutated cells and similar results followed. The viruses were shown to spread much less with mutant cells as opposed to normal cells.
This is a significant discovery in the medical field, especially since it was shown how serious infection can spread last year in Africa. With continued testing of this discovery and similar results, there may finally be a way to reduce the impact of Ebola on victims and may lead to a cure for it. It's also good to see that they were not one-sided with their research and also incorporated some other viruses to test at the same time. That would be amazing if tests show that many viruses need this calcium pathway to keep spreading and they were able to create one treatment that worked for hundreds of illnesses.
Original article here.