Cause of Host Specificity in Salmonella Determined by Penn Researchers 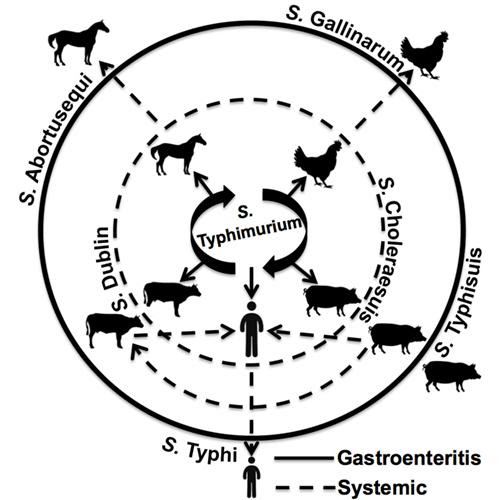 Many species of bacteria have multiple serovars, one species is Salmonella. Salmonella is commonly known for causing food poisoning, but only certain serovars contribute to human illness. Other strains which do not affect humans could possibly affect cows, poultry, or other numerous hosts. University of Pennsylvania scientists studied these different strains of Salmonella to determine the cause of their host specific adhesion. To determine the differences in the strains of bacteria, the researchers compared the bacteria's genomes. The analysis allowed the researchers to identify SNPs of the bacteria, most importantly polymorphisms in proteins on the surface of the bacteria. Surface proteins allow the bacteria-host interaction and were believed to be crucial in host specificity. After studying 580 different strains of the bacteria, the researchers determined that variation of the surface proteins supported their belief of host specificity caused by surface proteins. The scientists then examined the protein FilmH further, due to it having the most variation. To verify that the change in the FilmH protein was the cause of the different affinities of the Salmonella, the scientists modified E. coli bacteria to carry two forms of the FilmH protein:affinity to humans and affinity to bovines. The E. coli cells acted as predicted; the cells with the FilmH strain associated with human affinity were only attracted to human cells, while E. coli with FilmH protein associated with bovine affinity were only attracted to bovine cells.

By determining the protein which causes affinity in Salmonella, scientists can help prevent illness caused by this bacteria. The affinity of Salmonella strains was determined to be caused by the change of one amino acid. By altering this amino acid, vaccines can be made to prevent food poisoning from Salmonella.This can also help farmers protect their livestock if they are infected by Salmonella. I also feel that creating a vaccine based on altering FilmH can be dangerous. If the vaccine in humans alters the FilmH to a serovar with bovine affinity, could it lead to greater risk of livestock infection. I am sure there are other precautions which could be taken to avoid this risk, but an outbreak of Salmonella in livestock could be detrimental to human society.
Posted by Unknown at 1:51 PM