Pair of Genes Responsible for Wing-Shaped Fin Development in Batoids

Researchers at the University of Chicago have identified a pair of genes responsible for the wing shaped fins of skates and rays.  Rays, skates and other batoids have some of the most unique fin shapes of all aquatic species.  In an attempt to further understand how limbs in all animals develop researchers at the university of Chicago investigated the genetic and molecular cause of the unique shape of fins found in batoids.  The team accomplished this by studying gene expression in the embryos of batoids. In the developing limb, there are genes and growth factors arranged in a specific order which help to create the apical ectodermal ridge (AER).  The AER is a region that stimulates cell proliferation along the growing edge of the limb which is responsible for elongation and proper development.  They discovered that early in development batoids mirror limb development of other fish and tetrapod species. However unlike other fish and tetrapods which only have one AER, the batoids posses a second AER.  The presence of this second AER allows for development of the pectoral fin towards the tail and the head of the ray. 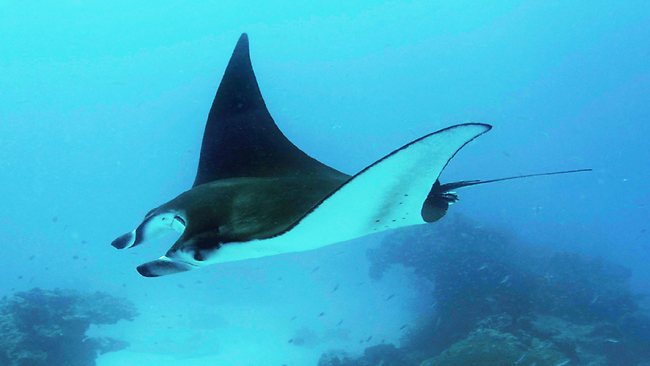 The researchers also found that different groups of genes control the two different regions of the fin.  The 5' Hox family of transcription factors and the Fgf10 growth factor are commonly found among fish species was also found and active in the batoids, this group of genes was responsible for growth towards the tail.  The region growing towards the head was controlled by 3' Hox transcription factors and the Fgf7 growth factor.  In species other than the batoids, the 3' Hox and Fgf7 are found at the base of the growing limb, the presence of these genes in the anterior portion of the growing pectoral fin of batoids suggests that this is a unique adaptation of the batoid species and is responsible for the second AER, giving them their fin shape.

Interestingly, although the two regions of the rays fin are nearly identically the gene expression in these regions is totally different.  This group of species have different mechanisms that control fin development compared to other fish species giving them their unique fin shape.
Posted by Unknown at 11:58 PM