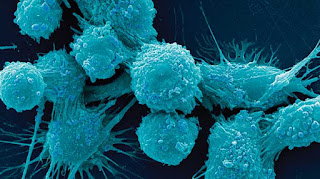 This study suggests that with 'suicide gene therapy' along with radiation that this therapy will prompt the immune system to attack these cancer cells in the prostate. The study included 62 patients who were divided into two groups. One group, who had cancer cells confined to the prostate, received radiation treatment. The second group, who had more aggressive prostate cancer, received both radiation and hormone treatments.The first group received the experimental gene therapy twice, and the second group got it three times during a phase 2 clinical trial conducted between 1999 and 2003.Two years after treatment, prostate biopsies were negative in 83 percent of the first group and 79 percent of the second group. After five years, there was no sign of cancer recurrence in 94 percent of the first group and 91 percent of the second group. Five-year survival rates were 97 percent and 94 percent, respectively, which is between 5 percent and 20 percent better than radiation treatment alone. A third and final stage of the trial is being conducted now in order to be approved by the FDA to be considered a viable therapy treatment.

I think this research is extremely important and is a great scientific breakthrough. There is still no cure for cancer and if this type of therapy resulted in a 97% and 94% survival rate than sooner than later than may be able to get those numbers to 99%. I know there are more progressive versions of cancer which have a lot less survivors but with this breakthrough they may be able to start implementing similar studies with versions of cancer other than prostate. Below is another link to a study conducted on Leukaemia research.