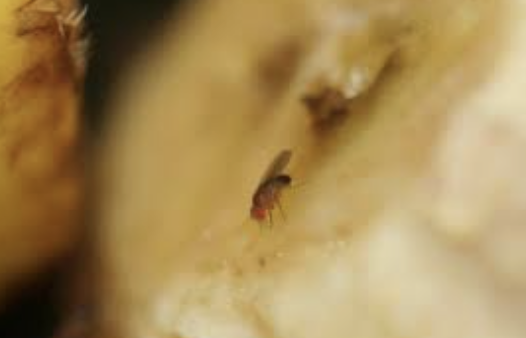 Drosophila melanogaster relies on contact chemosensation to detect nutritious foods, avoid ingesting toxic chemicals and choose mates and safe places to deposit eggs. Flies sense tastants and scents through gustatory bristles and pegs distributed on multiple body parts, including wing margins and legs. The sensillum's gustatory receptor neurons express 68 gustatory receptors (GRs). Unlike mammalian chemosensation, functional Drosophila GRs may include three or more subunits. Many GRs seem to be expressed in multiple cell types that are not associated with contact chemosensation, raising the possibility that these proteins may have roles that extend beyond the detection of tastants and scents.

Researchers have found that a cluster of genes encoding 6 receptors, known as gustatory receptors 64 (GR64s), was overexpressed in epithelial cells of mutant larvae, which experience cellular stress as a result of a buildup of dysfunctional proteins. To further investigate, the researchers rendered GR64 function in larval epithelial cells that contained stress-inducing mutations. Losing the taste receptors resulted in a large amount of death among the stressed cells. They found that the loss of GR64s prevented the cells from digesting accumulated proteins via autophagy compared to cells with functioning receptors, indicating that the receptor cluster may have something to do with cellular homeostasis. In their normal role as taste receptors, GR64s oversee calcium flow,  involved in protein regulation. Furthermore, the researchers found that calcium influxed into mutant cells has less activity in GR64-free cells compared to controls, making calcium signaling a common candidate for how receptors may maintain proteostasis.

It was very intriguing how the researchers identified the nonconical role of gustatory receptors in proteostasis maintenance for their function in neuronal sensation. Although, the article did not fully connect calcium activity to protein regulation. Regardless, calcium activity is an important unknown for a proper understanding of how this receptor functions.