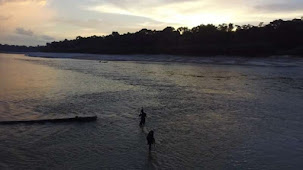 An article from phys.org shows how an expedition at the Javari River Basin have used environmental DNA (eDNA) sequencing to investigate fish diversity in the Amazon. The expedition team was looking to see if it was feasible to study diversity using this method instead of using traditional methods that rely on nets and other fishing gear which can negatively impact the environment. Using eDNA would help reduce environmental impact and to find all the fish species living their without catching and killing them.

This method involves extracting molecules of DNA that is present in water samples and identifying the species to which the DNA belongs to by using genetic markers. The marker most often used is the 12S mitochondrialRNA gene. To find the small molecules, such as excrement and animal parts, in the water samples, the researchers used DNA extraction kits designed to analyze blood and tissue. The team spent 18 days on the Javari River and collected water samples at three of 46 locations where they collected fish using traditional methods as reference to see if the eDNA testing was accurate. They were able to collect a total of 443 species including 60 that were undiscovered using eDNA. Using traditional methods at these three sites resulted in only 201 species collected.

The article does state the limitations of eDNA. For instance, only 58 out of the 201 species caught were identified with precision at the species levels when using eDNA analysis. This is because 12S is a slowly evolving piece of genetic code and is not sufficient enough to identify specimens at the species level because many of the species in the Amazon diverged quite recently in evolutionary terms. For example, two eels that diverged recently, Electrophorus viltai and E.electricus, would be difficult to identify with just the 12S marker. Perhaps more than one marker is going to have to be used to identify specimens up to the species level. The researcher do expect for the technique to improve over the years so that DNA sampling can be used to identify species accurately without the use of traditional methods.

Posted by Xavier Ramirez at 8:46 PM