The Cost of Cuteness: Why Many Breeders are Reversing Years of Selective Breeding 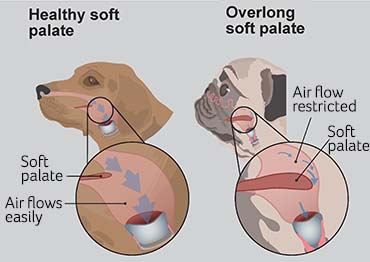 A condition called Brachycephalic Airway Syndrome is very common amongst some of the most popular dog breeds. Pugs, French Bulldogs, Boxers, and English Bulldogs, to name a few, are called "brachycephalic dogs", which means "short headed". While these breeds are becoming increasingly more popular and some are even considered "designer dogs", the consequences of years of selective breeding has put these dogs at great risk for major health issues. Common traits associated with Brachycephalic Airway Syndrome include elongated soft palates, malformed nostrils, and a narrow trachea. These traits make it very difficult for the dog to breathe, and is why many of these breeds snort when they breathe.

These breeds did not always have this issue, though. Years of selective breeding favoring shorter snouts, in essence, created Brachycephalic Syndrome. The favored "smushed" snouts not only elongated the soft palate, making it difficult to breathe, but also created folds in the face, which when not cleaned properly, can house some pretty nasty infections. Their smushed faces also make it difficult for the mother to give birth, so most times brachycephalic dogs must have cesarian sections to avoid major complications during labor. Many brachycephalic dogs end up in shelters later on in life, because the families were not properly educated on the health issues associated with the breed and were unable to cover medical treatments. Many veterinarians believe that these breeds should not exist.

There are some responsible breeders who have taken the matter into their own hands. While other breeders profit thousands of dollars off of these designer dogs, some breeders are attempting to reverse years of selective breeding, with more selective breeding. The idea is to only breed dogs with longer snouts, in an effort to save the breeds and eliminate the major health concerns associated with them.

Posted by Nicole Haralampoudis at 11:05 PM