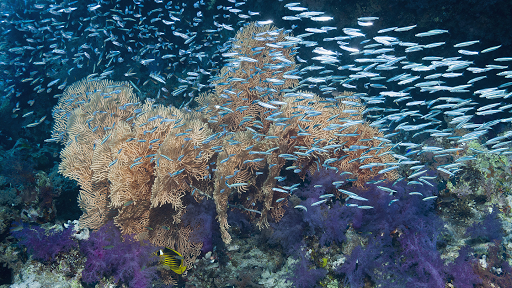 This article talks about the discovery of blue and yellow flashing dots on the silver slips of fish when in the light. Masakazu Iwasaka, an engineer at Hiroshima University mentions that instead of making their own light, the fish possess little photonic crystals that reflect certain wavelengths of light. These wavelengths alternate between blue and yellow. The dots were found to be no larger than 7 to 10 micrometers and were splayed out across the fishes back. Scientists went and took a closer look inside the dots and and saw that little platelets of the compound guanine have grown there.

Guanine is one of the major four coding units involving DNA. Iwasaka suspected that the blue and yellows colors only show in living silversides while dead silversides just show white. It was also speculated that the fish use the reflectivity as a type of camouflage or as a distraction from predators. Lastly, the article mentioned how Iwasaka hopes to create human made counterparts to the fishes reflectors and how he has come up with the idea of mimicking fishy structures for sensors.

I think Iwasakas idea of mimicking fishy structure for sensor is a good idea. I would like to see his idea come to life and see how well it works with these fish. I also am fascinated how these fish posses guanine which allows them to display these wavelengths when in direct light. I hope more studies are done to see if other animals have the same ability. Below I have attached another article that talks more in depth about silversides and their dots.

Posted by Giavanna Panico at 5:19 PM