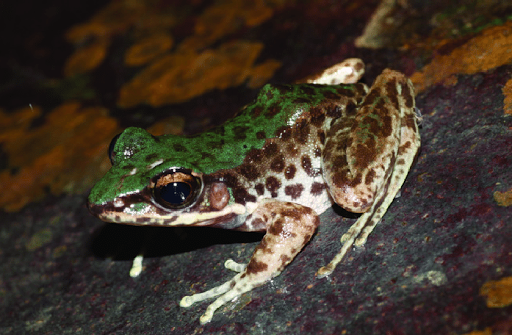 In an article by Sci-News.com titled "Taiwanese Frog Has Six Sex Chromosomes, Study Shows", it is outlined that researchers have recently found a multiple sex chromosome system which makes up three chromosomal pairs in the species of Taiwanese Frog known as Odorrana Swinhoana. The species is stated to be endemic to Taiwan, and is distributed commonly in areas with elevations below 2000 meters. As sex chromosomes typically evolve from autosomal pairs after acquiring a sex determining gene, they are rarely noted to fuse with an autosome.

As possession of multiple sex chromosomes is extremely rare in amphibians, the study conducted by Dr. Ikuo Miuro of Hiroshima University's Amphibian Research Center was groundbreaking in demonstrating a triple translocation of sex chromosomes, dictated not by random chance, but by precise genomic parameters.

Posted by Steve Neustadter-Schneider at 11:53 PM