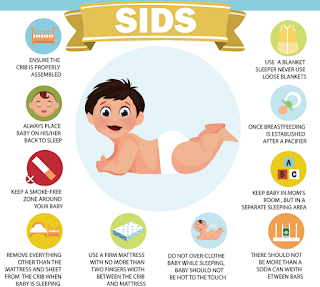 SIDS (Sudden Infant Death Syndrome) is an unknown medical phenomenon which is responsible for approximately 8% of post neonatal and infant deaths. Genetic studies have been conducted to hopefully pinpoint why this unfortunate fate continues to occur. Studies have been conducted on fatty acid metabolism and have only shown to be present in less than 1% of cases. Many victims of SIDS have been found to have activated immune systems. This would indicate a vulnerability to relatively harmless infections or illnesses. Such mutations cause polymorphism. The most common polymorphism interleukin-10 (IL-10) gene promoter have been investigated in SIDS cases, and the ATA/ATA genotype has been reported to be associated with both SIDS and infectious death.

Posted by bberchtold at 6:01 PM