Scientists Look at How Some Yellowstone Wolves Avoid Mange 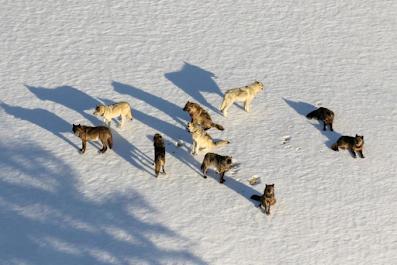 Wolves that inhabit Yellowstone National Park have been inbreeding for 25 years, the result of this has caused these wolves to be genetically similar. The benefit to this is that it can help wolves fight off mange which is a skin disease caused by parasitic mites. Dan Stahler, a wildlife biologist collaborated on this research which includes 25 years of wolf pedigrees, these pedigrees were used to look at links between genetic information and disease dynamics. In the article it states, that wolves with severe mange tend to have less genetic variation than wolves with mild symptoms. Symptoms from mange from severe to less severe can depend on the wolves "tools" to fight the infection given from genetic variety.

Some reactions the scientist saw were one wolf had over 50 percent hair loss and others had cleared the infection in no time. The wolves who had the most serve symptoms would either die off or not mate at all so they are taken out of the gene pool. The allows that wolves with the best genes to fight off mange to continue to breed together giving their offspring a better chance of fighting off mange. I think this important because maybe more research can be done based off this to see why one wolf gets worse symptoms then other wolf.

Picture is from article and research article is another good source to find out more.

Posted by Karlin Jimenez at 6:19 PM