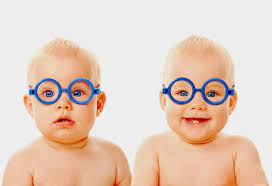 There has been a simple understanding regarding monozygotic twins.  However, there is a actually very minimal understanding regarding their genomic differences.  This article, by Hakon Jonsson, dives into this. The studies in this article explain that there are differences between the genomics between the twins.  Stomatic cells were examined. There was a high number of postzygotic mutations. Monozygotic twins, on average,  differed by 5.2 early developmental mutations. About 15% of the monozygotic twins have a high number of these early developmental mutations specific to only one twin. The article ultimately explains the genetic difference between monozygotic twins. In another article by Catherine Offord, it is stated how there are genetic mutations specific to only one twin even, thus further solidifying how different the monozygotic twins really are. These twins are not as similar the same as we thought.

Posted by Keith Sylvestre at 7:24 PM