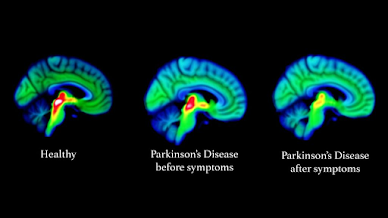 Parkinson's disease is a disorder that is caused by a loss of nerve cells in the part of the brain. This eventually leads to shaking, stiffness and difficulty with walking, balance and coordination. While there are treatments to help with the symptoms, there is no cure. According to this article, researchers are saying that a small skin test could accurately identify this disorder early on. Researchers say that this was an important study because patients are usually misdiagnosed with Parkinson's, early in the disease course, which eventually leads to complications with treatment and clinical trials. A chemical assay is able to detect clumping of the protein, alpha-synuclein. This article, by the NIH, emphasizes that the aggression of a-Syn is associated with the dysfunctionality and degeneration of neurons in Parkinson's Disease.