Coevolution of Bat Pollinators and Flowers 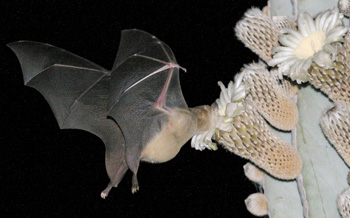 When hearing the word pollinator, most people would associate bees, wasps, or hummingbirds flitting from flower to flower. Taking in nectar with long tongues and just getting a bit of that pollen on themselves to transfer to the next flower. For flowers that bloom in the night, a bat is just a much significant as a bee would be to a day blooming flower. On certain species of cacti in Baja California, the long-nosed bat or the pallid bat are their only hope for reproducing future generation of cacti. A UC Santa Cruz article draws comparisons on how much pollen got stuck in the bats' fur after every visit. The long-nosed bat is more specialized for the pollination while the pallid bat is more specialized for insect eating. In the American Naturalist journal article details that the pallid bat would pick up 13 times more pollen than the long-nosed bat. The reason for this could be due to the behavior of the bats when it comes to feeding on flowers.
The long-nosed bat can hover in front of the flower and use its long tongue to gather the nectar. This lessens the physical contact with the stamens of the flowers and also the duration. Pallid bats on the other hand, had to wriggle into the flowers to  get access to the nectar. This would extend the time in contact with the stamens and more chances for the pollen to get on the fur. Also the long-nosed bats are migratory and pollination by them could vary year by year while the pallid bats are available to pollinate year round.
It is beautiful that some species of bat could branch out into other resources that are available.
Posted by Cynthia Doan at 2:28 PM