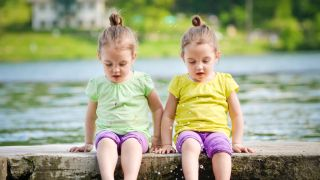 Identical twins are determined to be genetically the same and often only differ by 5.2 genetic changes. They come from a single fertilized egg and can also be referred to as monozygotic twins. Recently, a new finding suggests that identical twins may not be carbon copies after all.

In Iceland, researchers conducted a study looking at the complete genetic makeup of 381 pairs of identical twins. Only 38 of those pairs were duplicates of each other and had the exact same genetic makeup. Most of the DNA pairs consisted of a couple differences that the researchers suspected arose either before one embryo split or very early in development. Shockingly of the 381 pairs, 39 of them had more then 100 changes between the twins. Ones theory that resulted from the study was that more uneven splits of the embryo can lead to a greater number of differences.

Posted by Giavanna Panico at 1:39 PM