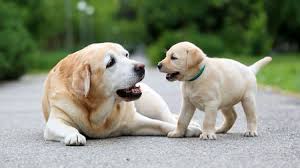 Dogs go through stages of life just as humans do. In this article, Scientists have come across similarities between the two species. They are useful in studying human aging because dogs are similar to humans in many important ways, such as how they act at a young and old age, and what happens within their DNA as they get older. A study in Vienna was done with border collies and they show the dogs took part in a touchscreen experiment at the University of Veterinary Medicine, which found that older dogs benefit from mind games and other brain exercises. Lab tests can tell how old a human is by the pattern of methylation, the same for dogs. The dog aging project is collecting genetic and other information from a vast number of pet dogs. They suffer a lot of similar ailments such as obesity, arthritis, hypothyroidism, and diabetes.

Posted by Alexa Mastroddi at 3:59 PM