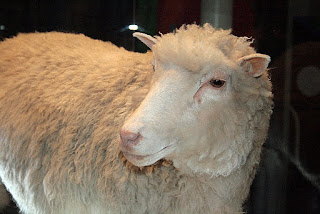 The Roslin Institute became a historical institute when they were the first company/place to clone a mammal from an adult cell. Dolly was cloned from a cell taken from the mammary gland of a six-year-old Finn Dorset sheep and an egg taken from a Scottish Blackface sheep. One reason this was very important was because it opened up the doors for many scientist who and specialize in stem cells. One difference between Dolly and a regular sheep was the telomeres, which is involved the aging in organisms. After many sheep, including Dolly, got cancer, Dolly had to be put down because she was losing much of her function. The whole national frenzy occurred back in the last 1990s, and although we can say it was very cool, it was more importantly treasured for the pathway into the type of research and other types of testing in genetics.
https://dolly.roslin.ed.ac.uk/facts/the-life-of-dolly/index.html
https://www.tacsciences.com/what-is-a-telomere.html
Posted by Michael Frank at 1:46 PM