Can Trees Get Cancer?

In an article published by PBS, a fascinating aspect of the Chernobyl catastrophe was brought to light, which was the effect that the radiation had on trees in the area. And, as it turns out, trees can get cancer, especially the trees in Chernobyl because of the amount of radiation they are exposed to. Radiation is not the only way in which trees and other plants can get cancer, they can also get cancer via mutations in their DNA, just like in humans and other animals. What I find particularly interesting is that cancer is not as lethal in trees as it is in humans and other animals. This is due to two main reasons. The first reason is that trees do not have a true circulatory system like humans have. Human circulatory systems contain cells with specialized functions, but trees’ “circulatory systems” do not transport cells, they transport nutrients, like in the form of sap. This means that it is very difficult for the cancer cells to metastasize, meaning that the cancer cannot spread to different regions of the tree nearly as easily as they can in humans. The second factor also limits the cancer’s ability to metastasize, and that is the plant cell well. Even in there was a true circulatory system in plants, the cancer cells would not be able to just break off and spread to different parts of the tree. The cancer cells are rather confined in that one location due to the structure of the cell. Since the tree cancers have difficulty spreading throughout the entirety of the tree, the cancer cells cannot cause nearly as much damage as they can in humans. 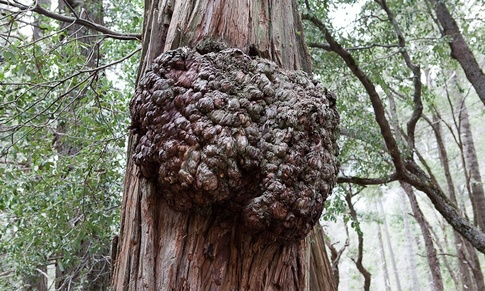