Genetically Modified Mosquitoes for the Win 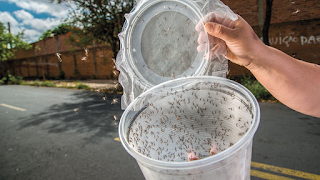 For some time the company Oxitec has been trying to test genetically modified mosquitos to suppress or lower the amount of the actual mosquitos. Mosquitos can carry deadly diseases like the Zika virus, West Nile virus, and Malaria. The way the company tried to do this is by deploying male mosquitos that don't bite and bear a gene that should have the mosquito killed before adulthood. research from a team of independent researchers found out the offspring survived and produced another offspring that reached full maturity. The offspring as a result inherited some pieces of the genomes from the genetically modified mosquitos. So far nothing shows that these hybrid mosquitos are any more dangerous than the wild ones. The tests in the lab showed that only 3% of the offspring survived when the male ones mated with female wild mosquitos. The company has also shown to work by lowering the mosquito population by 90% in the Brazilian city Jacobina. They plan on trying this in Florida but are worried that the residents might not agree because of the first report showing that the GM mosquitos didn't work. The next test will have a better strain of the mosquitos released and hopefully, this can potentially get rid of any disease-carrying mosquitos for good.