The Increasing Impact of Genetic Studies on Homo Sapien Evolution 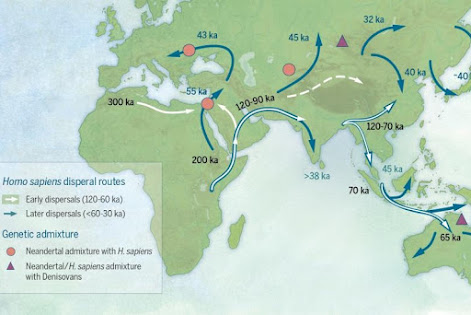 In Katarina Zimmer's article from TheScientist she mentions the role genetics has played so far in the study of human evolution. In the past, excavating and studying fossils was the primary method for this. However genetic studies have become a more popular technique, already making a big impact. An example of this is the multi-regional model. This model stated that homo sapiens left Africa and were evolving separately in different regions of the world. This was proven to be incorrect when DNA in the maternally inherited mitochondria was traced all the way back between 100,000 to 200,000 years ago to a single woman ("Mitochondrial Eve")living in southern Africa. This discovery helped prove the  more widely accepted model today, the replacement model or the "Out of Africa" model. The new model stated that all homo sapiens evolved in Africa then migrated and settled in many regions around the globe. This article showed me how big of a role genetics has played, with the replacement model being just one of the many cases where genetics has played a big role. Although this isn't the only method we should use, I think its role will continue to grow when trying to solve this mystery.