Animals that Pass Down Other's Genes and Not Their Own?! 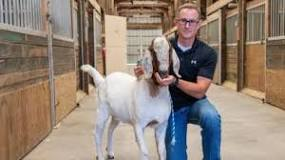 According to a Times of India article, team of scientists led by Jon Oatley used a gene editing tool to create "surrogate dads", or males of an animal species, specifically goats, pigs, cattle, and mice, that are originally sterile (by deleting the NANOS2 gene, which controls the fertility of animals), but then have their testes injected with the stem cells containing the DNA of another animal. The "surrogate dads" then produce sperm, but only with the DNA injected in their testes, not their own. This is expected to be used to advance the world of selective breeding and to easier transfer more desirable traits to livestock. In addition to this, these "surrogate dads" can help animals that are rare or facing extinction to have their DNA immortalized through sperm.
Posted by Alexis Chow at 5:08 PM