Evidence of an earthquake was discovered within organisms' DNA, further proving the theory that "catastrophic earth-history events can drive rapid biological evolution"


Catastrophic events can be a major driver of evolutionary change over geological and contemporary timescales, with examples including evolutionary diversification following mass extinctions caused by extreme volcanism or asteroid impact. However, smaller examples are scattered far and few within the scientific community; they're much more difficult to study.

Nonetheless, in early July researchers say that, "the genes of bull kelp (pictured below) along the shore of the South Island of New Zealand bear marks of an earthquake that occurred 800 years ago when part of the ocean floor rose upward and wiped out its inhabitants." 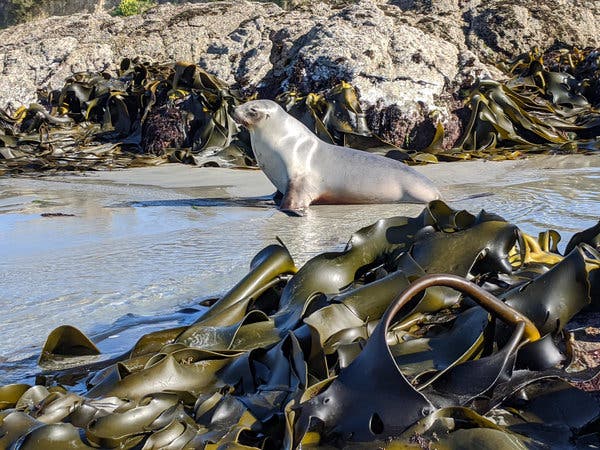 By taking samples of kelp along a 60-mile stretch of shore, though individual kelp looked much the same as the others of its species, when scientists examined the genetics they found there were large differences linked to where the kelps had been collected. Bull kelp that lived along a 15-mile stretch that had been forced into the air during that long-ago earthquake were distinct from their neighbors of the same species on either side, whose homes had long lain undisturbed.

This study highlights the rapid and enduring evolutionary effects of catastrophic ecosystem disturbance and reveals the key role of range expansion in reshaping spatial genetic patterns.

This overlap in genetics and geology is, aside from further evidence to a long-standing theory, also an example as to how important all organisms are. While geologists typically rely on rock markings, agings, and like methods to determine historical geological events, in this specific scenario geological evidence only showed a similar earthquake in the area. Had the kelp gone extinct, or just the line of genes, there would be no further evidence. Every species really is important; genetically, ecologically, and historically.

Link to NYT Article: https://www.nytimes.com/2020/07/14/science/earthquake-dna-genes-kelp.html?searchResultPosition=6
Link to study: https://royalsocietypublishing.org/doi/10.1098/rspb.2020.0712
Link to learn more about evolution as a result of major events: https://www.ncbi.nlm.nih.gov/pmc/articles/PMC5434096/
Posted by Dana Kelly at 6:52 PM