It has been understood for a while now that genetics plays a huge part in patients with depression and anxiety. Most people are predisposed to the conditions because of the genetics passed down from their parents: if your dad suffers from depression and/or anxiety, you would be more likely to also struggle with the conditions at some point in your life. Current studies aren't denying the fact that genetics play a role, but suggesting that other epigenetic factors are necessary to see the effects of these conditions in people who are predisposed. 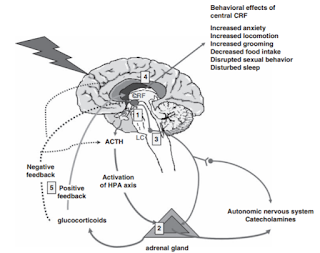 The above graphic was pulled from the second article, The CRF system, stress, depression and anxiety—insights from human genetic studies. The graphic outlines one of the most significant pathways that are affected in people with anxiety, depression, and various other mental illnesses. The main focus of this pathway is the corticotropin releasing factor (CRF), which regulates the hypothalamic-pituitary-adrenal axis (HPA axis). The adrenal glands in the body control stress response, most commonly the fight or flight response. Since CRF plays such a key role in the activation or inhibition of the HPA axis, researchers are beginning to look into targeted therapy that can regulate CRF. If CRF is regulated, the HPA axis would be regulated - meaning anxiety and depression responses would be able to be controlled and mitigated.

Since genetics predisposes people to anxiety and depression, and social interactions can shape or alter the DNA, some people may have an enhanced risk of developing these illnesses. For example, someone who has been traumatized by sexual assault and who is genetically predisposed to depression and anxiety will be extremely likely to develop and experience depression and anxiety. On the contrary, someone who is not genetically predisposed but was not lovingly nurtured by their parent growing up still may be likely to develop and experience anxiety and depression because their experience may alter their DNA and how it is expressed which may affect neural links in the brain.

I think the possibility of targeted drug therapies for depression and anxiety are something of the near future. If the HPA axis is the main player in many of the mental illnesses, it may be possible to stop the onset of symptoms in at-risk patients before they even begin, allowing people to live a normal life. If the HPA axis and CRF is a big factor in other mental illnesses like schizophrenia, a drug that targets CRF may be the key to finding a cure for these ailments and since it would be targeted therapy, there is the possibility of little to no side effects. I definitely think this topic deserves more research since there is the possibility of giving patients a whole new life, no matter what their age, so they can have an overall better quality of life.