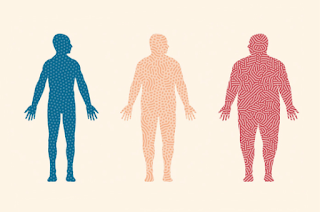 The subjects in this study had been thin all their lives, and not because they had unusual metabolisms. They didn’t care much about food. Britain researchers have discovered a genetic alteration that mutes their appetite. The scientists’ study relied on data from the U.K. Biobank, which includes a half million people aged 40 to 69. Participants have provided DNA samples and medical records and have allowed researchers to track their health over years.

The study of the appetite-dulling mutation was led by Dr. Sadaf Farooqi, professor of metabolism and medicine at the University of Cambridge, and Nick Wareham, an epidemiologist at the university. The study drew on Dr. Farooqi’s research into a gene, MC4R. She has probed it for 20 years, but for the opposite reason: to understand why some people are overweight, not why some are thin. People with MC4R mutations tend to be obese. Researchers have recorded as many as 300 mutations in this gene, and they are the most common single-gene cause of obesity. The mutations destroy satiety, the feeling of fullness after a meal, Dr. Farooqi and her colleagues have found. Normally, when people eat a meal, the gene is switched on and sends a signal telling people they are full. Then the gene turns itself off. But some people carry a rare mutation in MC4R that prevents the gene from working. As a result, their bodies never get the signal that they have eaten enough. They always feel hungry and often are overweight. In the new study, Dr. Farooqi and her colleagues found that in some thin people, the MC4R gene is always turned on, instead of always off, because of different mutations involving a previously unknown metabolic pathway.