A research team at the University of Pennsylvania Perelman School of Medicine, led by epigeneticist Shelley Berger, were able to alter the behavior of Florida carpenter ants. These ants develop specialized jobs early in adulthood. In these ants there are two distinct jobs—major ants which help protect the colony and Mino ants which forage for food and other resources. The research team was able to identify an epigenetic pathway in these ants that can be altered which results in this change of behavior in the ants. Epigenetics is the study of changes in organisms caused by modification of gene expression rather than alteration of the genetic code itself. The research team injected the chemical trichostatin into the brains of various ants at 0, 5, or 10 days after the ants had reached adulthood. The results were that the ants who reached adulthood from 0-9 days exhibited minor aunt behavior such as foraging for food, etc. Trichostatin acts by preventing the degradation of juvenile hormone which is found in high concentrations in minors. The gene responsible was RCOR1, which encodes for the protein CoREST which was food to be responsible for this altered ant behavior. 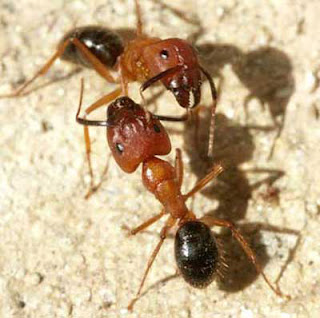 This is an amazing discovery because there are a lot of caste roles in insect communities especially ants. It has always been suspected that the epigenome plays a big role in these large behavioral differences. This is the first study in which the actual mechanism has been identified.