As most of us know, whales and dolphins were at one point land dwelling organisms. This evolution from land to water can be dated back to around some 50 million years ago when the first ancient whales evolved.

Researchers reported to Science Advances on September 25 that ancestors of orcas, bottlenose dolphins and other cetaceans lost function of at least 85 genes as these animals adapted to life under water. This was done by comparing the DNA of whales, dolphins, and other cetaceans to mammals and found that 236 of them are missing from cetaceans. Of the 236 missing genes, 85 are still present in hippopotamuses (cetaceans closest relatives). This suggests they were lost during the land to ocean migration around 50 million years ago when they first 'whales' appeared.

Some problems that come with diving at great depths are blood pressure, blood clotting, and protecting DNA from damage. To solve this these animals dropped off genes that regulate blood pressure, blood clotting, and DNA repair. DNA  undergoes damage from cycling between areas of high and low oxygen—shallow to deep water. One of these genes that was abandoned was POLM, which codes for a DNA repair enzyme that is error prone even in the best circumstances. The phasing out of these gene may have given these organisms an advantage. Another lost gene was SLC4A9, which regulated the production of saliva. Since they live underwater, saliva is not needed to lubricate or help break down food so that gene could go away with ease. It also allows them to retain for freshwater inside their bodies which is especially important in a place that is moisture sapping such as salt-water environments where these animals live. The gene that controls melatonin (sleep-inducing hormone) was lost which means they don't necessarily 'sleep.' They rest using half of their brain at a time. 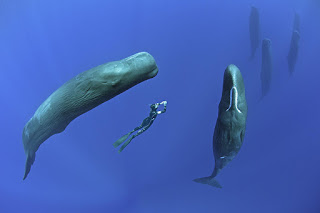